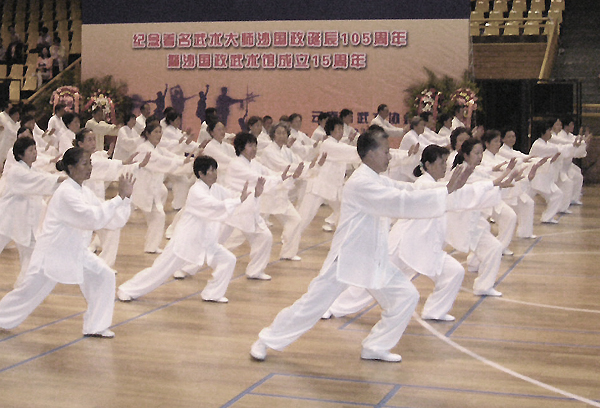 Some research on Qigong

Birinder Tember   |   Kung Fu, Qigong   |   No comment
M y mother first introduced me to Qigong exercise in the form of Indian vedic spiritual exercises when I was five years old. The pranayam (breathing exercises) as they are referred to were simple to perform, but boring. Sitting for a minimum of 30 minutes with a focus on the ‘Tisra Til’ (Third Eye; location of Yintang – between the brow), seemed to be never ending and tedious, but from recollection, calming, as I was quite hyper as a child. The exercises became habitual and eventually, I was happy to do them, although for only short periods.

At about the same time, I developed a keen interest in Japanese Martial Arts. As I went through my teenage years, the passion for Martial Arts grew stronger and the pranayam exercises faded.  It wasn’t until 1987 when I began practising Chinese Martial Arts that I was re-introduced to Qigong very briefly. Four years later when I met Master Wen Linjun, (my principle teacher), the importance of Qigong for both health and Martial Arts became apparent and meaningful again.  We studied ‘Zhen Yuan Gong’ and Baduan Jin Qigong amongst other qigong and martial practices regularly. The benefits developed my interests further and I was fascinated by the outcome on my health as a result of the practice. I continued to learn variations of Qigong with several Master’s and eventually went full circle and ended up in Northern India for instructor training in Pranayam!

The one thing I have found common to virtually all Qigong sets that I have learnt is that they calm the shen almost immediately. Other benefits become apparent with regular practise over time. I was fortunate to have been asked by David Mayor to contribute to a book focusing on ‘Qi’, which required research of various Qigong practises. Working in conjunction with Professor Cyril Smith, a retired  physicist from Imperial College, a specific ‘water dowsing’ technique was used to measure the Qi projections from a distance to ascertain if and to what extent the various qigong practises imprinted a specific frequency on water contained in glass tubes.

Smith claims to have found specific endogenous frequencies for each of the acupuncture meridians which he is able to measure from imprints left on tubes of water using ‘dowsing’. The theory of frequency in biological systems was initially presented by Herbert Frohlich in the late 1950’s. Sergio Fedatov, a physicist based in Vladivostok, Russia also claims to have discovered specific frequencies relating to each of the acupuncture meridians and has subsequently developed a pulse machine that shows which meridians have a ‘full or deficient’ condition using specific frequencies similar to that of Smith’s dowsing methods. I was fortunate enough to meet with Fedatov in 2008 and witness his pulse machine in action.

The basis of homeopathy is also based on frequencies imprinted in water following a process of dilution of the water with a mother tincture followed by succession (a process of tapping the water vile containing the diluted substance on a leather bound book). One drop of the tincture to 100 drops of water following succession gives a 1c remedy. One drop of this remedy mixed in a further 100 drops of water gives a 2c remedy and so on. The higher the number, the more dilute the substance, yet the higher the potency. Borland (1982).

Batmanghelidj (1992) also advocates the theory of imprints on water which change the frequencies and have relative effects on the biological systems dependant on the imprint. In his book, ‘Your Body’s Many Cries For Water’ he claims to have cured life threatening illnesses simply with water.

In the Qi experiments conducted with Smith, I used several Qigong practises including mudras (hand/finger positions) Mantra’s (similar to prayers) ‘Healing Sounds’ Qigong, Indian yogic Pranayam  exercises as well as more commonly practised Qigong’s such as Yi Jin Jing and Baduan Jin. The water vile had blank frequencies to begin with and following each practise, Qi was projected using intention from approximately a metre away. Every practice imprinted between 1 and 4 frequencies.

Some correlated exactly to what the Qigong posture is stated for, i.e an exercise for the Lung’s showed the frequency for the Lung after projecting Qi imprinted in the water. However, some did not correlate directly and there could be several reasons for this. In one test I intended to stimulate the Spleen but a Heart stimulating frequency was measured. “This tube did not show any response to 5.500×10-2 Hz  from the oscillator, the nominal frequency of the Spleen meridian but did show a response to an imprint copied from an actual Spleen meridian at this frequency”. (Smith 2009). Interestingly, most tests showed an imprint of the Heart frequency amongst others indicating the Shen calming effects of Qigong.